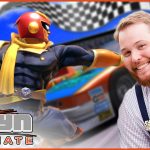 Your weekly weekend podcasting source recaps the biggest news in anticipation of Super Smash Bros. Ultimate – Youko returns with Super, TonyTH, and our guest Joel Orndorff (Imabeast78) to discuss an F-Zero combination of Captain Falcon and a crossover medley, an upcoming exhibition on the EVO 2018 stage, Nintendo Direct and Isabelle rumors, the Mii fighters show that the shadow of customs lives on, Princess Peach’s Castle rounds up this week’s Smash Blog updates, and questions from Timberwolf and Missingno87 about stages for our most wanted characters and Brawl and Smash 4’s biggest character mistakes

(53:38) MAILTIME
• (54:04) Timberwolf: “What kind of stage would you want to see come with your most anticipated newcomer, if they’re not from a heavily represented series already?”
• (1:00:53) Missingno87: “What do you see as the biggest mistake in Brawl and Smash 4 regarding character choice and move sets?”

50 E3 2013 Yes/No Questions, Big Boss Predictions, and Kiefer Predictions are discussed. In this THREE HOUR monstrosity of an episode, we used Skype in order to have fans of the show call in live to discuss speculative E3 topics with us. Discussion includes Microsoft, Sony, Nintendo, Third-Party, and much more! Fans gave their bold “Big Boss Predictions” and then followed it up with even crazier “Kiefer Predictions,” after the news broke that Kiefer Sutherland would be the voice of Big Boss in Metal Gear Solid V. After E3 happens, we will be back next weekend with the winner of our Yes/No contest in order to discuss all that happened at the Electronic Entertainment Expo! But for now and for posterity, enjoy this hype-filled episode! Youko, TheBuzzSaw, Super, TonyTH, and all our fans who called in break down the latest news from the gaming world!

THIRD-PARTIES
Will Square-Enix’s planned Final Fantasy game announcement be the next numbered installment (XV)?
Will Valve announce a new game for at least one of the following franchises: Half-Life, Portal, or Left 4 Dead?
Will Namco either announce a new Tales game or a localization of a Japanese-only release in the franchise?
Will Respawn Entertainment’s new game appear during a press conference?
Will EA show a gameplay demo for NBA Live 14 during their conference?
Will Wii U be completely absent from EA’s conference?
Will there be a demo of Watch Dogs during Ubisoft’s conference?
Will Level 5 reveal a release date/window for the localization of Professor Layton vs. Ace Attorney?
Will SEGA pull the surprise that Sonic will be playable in the next Mario Kart game for Wii U?
Will a new game be announced that is part of a series whose last game came out more than 10 years ago?