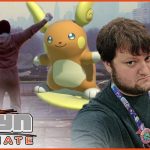 Your weekly weekend podcasting source recaps the biggest news in anticipation of Super Smash Bros. Ultimate – Youko returns with Super, TonyTH, and our guest Grant Smith (MasterWGS) to discuss the four character updates of the week, a Nintendo Direct with Mother 3D rumor, Smash Bros. as a “happy accident,” Jun Senoue rocks a Mega Man 4 medley, the Alolan Raichu Pokéball update rounds up this week’s Smash Blog updates, and questions from DVDSmith and Zenjestr about changing movesets for more game references and the character reveal that would make us lose our mind

(46:45) MAILTIME
• (46:59) DVDSmith: “There’s been a lot of talk about characters’ movesets changing or not changing (mainly in SSBU around Ganondorf and the appearance of his sword). Would you rather your main got an entirely new moveset that was more referential to their original games (like giving Luigi his Poltergust), or would you rather keep the same moveset from previous Smash games with minimal changes, to keep continuity between the titles and so you don’t have to relearn your main? Personally, I’m in favor of new movesets because it will add more originality and reduce the number of non-Echo fighter “clones” (for example, giving Young Link a moveset based entirely around the masks from Majora’s Mask, to differentiate him from Toon Link), but I’m interested to hear your thoughts.”
• (55:10) Zenjestr: “What character reveal would make you absolutely lose your mind? Think D1’s reaction to Snake coming back.”

PlayStation All-Stars, Nintendo Goes Digital, and Competitive Gaming Broadcasting are discussed. Also, the Madden Curse and Brawl Tier List v7 in the Soapbox segment, DBZ and Basketball Kinect Games is our Hilarity of the Weak, and much more! Cyberlink420, one of the creators behind the SonicFSeries YouTube channel and friend of the show, joins us as this week’s guest. This week’s Thought involves Sequels – which ones live up, don’t live up, or go against the grain to their gaming originals? Youko, Super, TonyTH, and Cyberlink420 break down the latest news from the gaming world!

Project M Demo 2 Hype, Project X Zone, and Halo 4 Info are discussed. Also, Monster Planet is our Hilarity of the Weak and much more! Shadic, Falco400, and Strong Bad from the Project M team join to discuss everything related to the imminent Demo 2 of their game, plus Gimpyfish stops by as well! Unfortunately, Youko was unable to attend the show, due to scheduling and voice-related issues, but Super and Tony hold down the fort for this long episode! Super, TonyTH, Shadic, Falco400, Strong Bad, and Gimpyfish break down the latest news from the gaming world!

Episode 107: Between Earth and Fools

3DS One Year Later, ME3 Ending Fallout, and PS4 Orbis Rumors are discussed. Also, One Word Reviews and Wrestlemania in the Soapbox segment, Bad Language in Online Games is our Hilarity of the Weak, and much more! MajorMoses is the winner of the Super-Fan contest for his SMYN Manga, so he joins the show as this week’s guest. This week’s Thought involves April Fool’s Day – what are some memorable pranks and what do the hosts tend to fall for? Youko, Super, TonyTH, and MajorMoses break down the latest news from the gaming world!

New Networks, Ace Attorney News, and Zelda Timeline are discussed. Also, Jessica Chobot in Mass Effect 3 and Brawl’s Fractured Scene in the Soapbox segment, Capcom’s SFxT Trolling is our Hilarity of the Weak, and much more! There is no guest this week, but Super is on location at a Smashfest and Youko is loopy from a lack of sleep. This week’s Thought involves the Super Bowl – do the the hosts think there is a gaming equivalent and what are their plans for the big game? Youko, TheBuzzSaw, Super, and TonyTH break down the latest news from the gaming world!