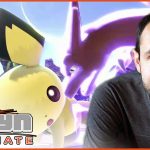 Your weekly weekend podcasting source recaps the biggest news in anticipation of Super Smash Bros. Ultimate – Youko returns with Super, TonyTH, and our guest Joe DeVader (TheDobaga) to discuss how Pichu might be broken, Sakurai’s thoughts on leakers, Bill Trinen recognizing Captain America, Snake Eater misses out on the composer crossover, Moray Towers rounds up this week’s Smash Blog updates, and questions from Plumokin and GoldenSandslash about our most wanted third-party character and game spoilers in character trophy descriptions

(53:23) MAILTIME
• (53:51) Plumokin: “If you could choose any other 3rd party character to be in the game, who would you choose and why?”
• (58:18) GoldenSandslash: “I noticed that the Lucas trophy in Brawl spoils various plot twists in Mother 3, but the Lucas trophy in Smash 4 doesn’t. Curious about where you stand on this. Do you think that trophy descriptions should be allowed to spoil plot twists for their native games? Or do you think that trophy descriptions ought to remain spoiler-free? The former is better for those that have played the games, the latter is better for those who haven’t.”

After Episode 73 at Youmacon 2010, Youko randomly broke out a guitar and everyone in the room sang gaming songs at midnight! This is the easter egg to Dangercast Episode 9, thanks to Box of Danger!