Welcome to the one and only…
Show Me Your News Game of the Year Awards! 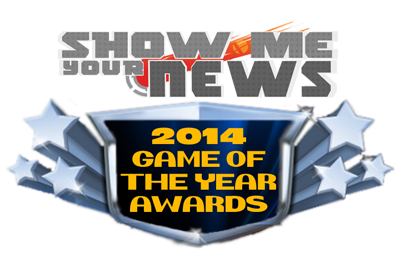 What are the SMYN GotY awards, some may ask?

It began five years ago in 2009, when PsychoWingX9 held a poll for what community members thought should be the Game of the Year. The poll resulted in a tie between Metroid Prime Trilogy and New Super Mario Bros Wii. The structure was very relaxed and it was a great idea that Master of Fossils sought to improve upon for the next year.

The first thing that Fossils did was seek out more categories in which to nominate games for. Second, he wanted a much larger variety of games to be recognized as the first year was very Wii-biased. He also instituted a private message (PM) voting system over the standard poll to allow greater variety and ease in the way people vote.

What made the 2010 GotY awards really special was what I, Youko, did – turning that little project into a professionally done, full-fledged episode that would achieve the emulation of a live action show with various SMYNjas appearing as guests. We have done this every year since then, making each show even bigger and better than ever. So far, Super Mario Galaxy 2, Batman: Arkham City, Telltale’s The Walking Dead, and Fire Emblem Awakening stand as winners of the Game of the Year award.

But how do these elections work?

First off, we begin with a nomination round in which any member is allowed to post a list of games they want to nominate for each category. Each member is encouraged 4 nominations per category. This is meant to build a diverse selection of games, so that we may pick the best finalists to ultimately pick a winner from. Therefore, if someone has already nominated a game you think deserves a nomination, there is no added benefit to you nominating that game again. Hopefully the logic behind this is clear – we want a wide range of games to pick finalists from, instead of the community tipping its hand regarding the winner.

– The nominated games must have had North American release dates from December 5, 2013 to December 5, 2014.
– The games must be in FINAL RELEASED FORM, so no demos or in-progress betas are allowed. Similarly, console/PC ports are discouraged from being nominated.
– Please bear in mind what each category represents. “Game of the Year” does not necessarily mean “Favorite Game You Played This Year.” If you believe the game’s merits make it stand above all the rest for that title, then by all means, select. Same thing goes for if your favorite game really did have the Best Soundtrack, Graphics, etc. Please be careful not to “fanboy/girl out” and please choose thoughtfully once the narrowing/voting process begins. Nominations are meant to build the list of choices, so have fun with those!
– You are free to ask your fellow SMYNjas questions, or have any civilized discussions with them, before nominating and voting. Here is the place to do that.
– The GotY Planning Committee reserves the right to veto any nominations before the finalist voting period, for any number of reasons, upon discussion with the community.

Next, once all the nominations have been decided, there will be a finalist voting period in which each member chooses their top 3 choices from each category. DO NOT POST THESE CHOICES IN THE THREAD! When this voting period begins, you will PRIVATE MESSAGE ME OR EMAIL TO SMYNSHOW@GMAIL.COM your 3 choices (in no particular order) for every category and I will keep a running tally of the winning games. You may only submit ONE VOTE via private message – NO EDITS! At the end of this period, I will post the top 4 for every category and the top 5 for the “big ones” (GotY, Best [System] game, etc).

Once these finalists are chosen, members may place votes for their single, top choice AGAIN ONLY BY PM’ING ME. Once the voting period for the winners end, the development for the show really goes into motion.

I love Smash Bros. You love Smash Bros. Most of us know that this is a community founded on a love for the Super Smash Bros. franchise. That said, something has to be done before this award show becomes a giant love-fest for the latest Smash Bros. release. That said, Super Smash Bros. for Wii U and 3DS may NOT be considered for nomination in the following categories: GAME OF THE YEAR, BEST WII U GAME, BEST 3DS GAME, and BEST SOUNDTRACK. We want to show the diversity of the games that were released in 2014, instead of fixating on what we may be predisposed to vote for easiest.

It begins. Thirty categories. Here’s the voting schedule. GET TO IT! 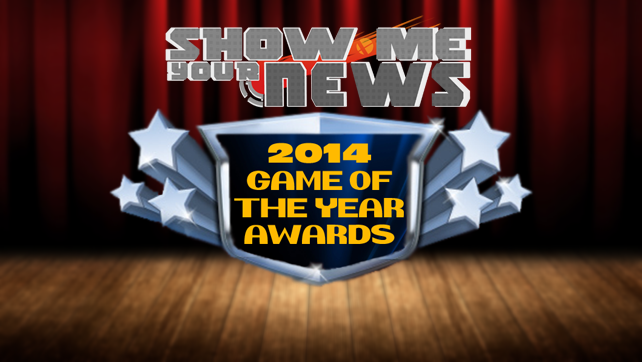 BEST GRAPHIC DESIGN IN A GAME
(Please vote for the game that accomplished the most appealing visuals, not necessarily the ones that appear to be the most life-like)
Bayonetta 2
Mario Kart 8
P.T.
Super Smash Bros. for Wii U/3DS

MOST PLEASANT SURPRISE
(Please vote for the game that you initially did not expect a lot from, but you were very pleased with the final result after playing it)
Goat Simulator
Middle-Earth: Shadow of Mordor
Tomodachi Life
Wolfenstein: The New Order

MOST DISAPPOINTING GAME
(Please vote for the game that you had high hopes for, but you were ultimately underwhelmed with the final result after playing it)
Assassin’s Creed Unity
Destiny
Sonic Boom: Rise of Lyric
Watch Dogs

MOST UNDER-RESPECTED GAME
(Please vote for the game that you believe need to be recognized more for their accomplishments, yet the gaming community at large seems to ignore them)
Call of Duty: Advanced Warfare
Danganronpa: Trigger Happy Havoc
Five Nights at Freddy’s
Shovel Knight

MOST ANTICIPATED GAME
(Please vote for the game that you are looking forward to, which must have a confirmed 2015 release window)
Batman: Arkham Knight
Metal Gear Solid V: The Phantom Pain
Splatoon
The Legend of Zelda (Wii U)

BEST RE-RELEASED GAME
(Please vote for the game that accomplished the most in bringing an older game – from a previous console generation or older, simple console/PC ports not included – to a newer platform)
Bayonetta
Kingdom Hearts HD 2.5 ReMIX
Pokémon Omega Ruby/Alpha Sapphire
The Last of Us: Remastered

BEST ACTING PERFORMANCE
(Please vote for the singular actor and their respective role – not an entire cast of a game – that excelled in bringing digital performances to life)
Hellena Taylor (Bayonetta from Bayonetta 2)
Scott Cawthon (The Phone Guy from Five Nights at Freddy’s)
Xander Mobus (Announcer from Super Smash Bros for WiiU/3DS)
Melissa Hutchinson (Clementine from The Walking Dead: Season Two)

BEST INDEPENDENT GAME
(Please vote for the game that was made by an independent game developer, whether that is a team or an individual, who is without video game publisher financial support)
Five Nights at Freddy’s
Octodad: Dadliest Catch
Shovel Knight
Transistor

BEST MOMENT FROM A GAME
(Please vote for the best moment or event that took place in games this year)
6 AM (Five Nights at Freddy’s)
Welcome to the World of Pokémon! (Pokémon Omega Ruby/Alpha Sapphire)
Fighting Master Core (Super Smash Bros. for Wii U/3DS)
Shared Feelings (The Last of Us: Left Behind)

STUDIO OF THE YEAR
(Please vote for the game development studio that did the most exceptional job in their work this year)
Level-5 (Professor Layton and the Azran Legacy, Professor Layton VS Phoenix Wright: Ace Attorney, Fantasy Life)
Scott Cawthon (Five Nights at Freddy’s, Five Nights at Freddy’s 2)
Sora Ltd. (Super Smash Bros. for 3DS, Super Smash Bros. for Wii U)
Telltale Games (The Walking Dead: Season 2, The Wolf Among Us)

ANTAGONIST OF THE YEAR
(Please vote for the singular character from video games – usually, but not necessarily the lead character – who was vital to hindering the progress of the protagonist)
Xenomorph (Alien: Isolation)
Monokuma (Danganronpa: Trigger Happy Havoc)
Foxy the Pirate (Five Nights at Freddy’s)
Master Core (Super Smash Bros. for Wii U/3DS)

Above all else, have fun! This is YOUR award show!

Keep the discussion going on Twitter, spreading the word with #SMYNGotY